How to Choose a Jigsaw: Detailed Guide

A jigsaw is a powerful tool that can cut through a variety of materials in many different cuts so in order to pick the best, it’s important to know how to choose a jigsaw. Starting from materials such as metals, wood, plastic, ceramic tiles, it’s a very handy power tool to have at your garage or workshop.

If you know how to handle one right, you can make cuts that are curved, crosscuts, ripping, plunge, beveling etc. You can even customize the cuts based on your preferences. 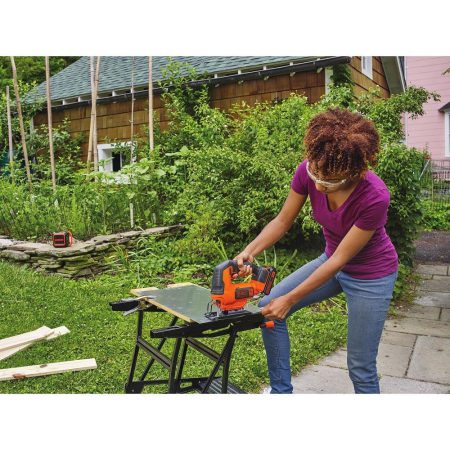 What’s amazing about a jigsaw is that it is multipurpose tool. With a jigsaw you can replace other tools like the router, scroll saw, band saw or circular saw. Other than cutting, jigsaws can also make holes for things like electrical sockets, hobs, and sinks.

What’s more, jigsaws tend to be more versatile than many other types of tools, such as the circular saws. They are also more lightweight, portable and agile than the rest. Jigsaws only use a small vertical blade, but it can move up and down at up to 3,000 strokes per minute.

Different jigsaws have different features, so it’s important to have a clear idea about one’s particular need. The prices can vary from about $20 to $400. Based on the requirements, it is easier to choose a jigsaw.

Here are some things to look for when choosing a jigsaw:

There are two types of jigsaws: corded and cordless. They operate exactly as they are named, as in the one corded is operated through a connection to a power outlet, whereas a cordless jigsaw is powered by a battery. Both have their own sets of strengths and limitations. 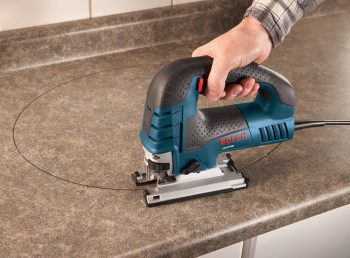 Most of the jigsaws available in the market are corded. These are more powerful compared to the cordless ones as they run on unlimited run time since they’re connected to a continuous power supply. The corded jigsaws can thus effectively cut through any strong materials such as metals and hardwoods.

Another advantage being the continuous workflow: Because of the connection through a power socket, one can work with a corded jigsaw without having to take a break, which happens often while working with a battery operated one.

In addition to that, corded jigsaws are lighter than cordless ones since there is no need for added stuff like batteries.

But of course, there are disadvantages to a corded jigsaw as well. One of the major ones is that they are limited to be used within the area of the power socket depending on the length of the cord. So the cords naturally makes the jigsaw less portable. Without an extension lead, one’s work area is limited.

Another disadvantage is the complexity of working with a corded tool. It can be bothersome to work with sometimes, in extreme cases even the cord can get cut off if one is not careful enough.

It ultimately comes down to one’s particular need as we’ve mentioned earlier. For cutting through strong materials and lengthier projects, a corded one is recommended. Also, consider the usage rate. If you plan to use it only once in a while, don’t get a higher end tool. 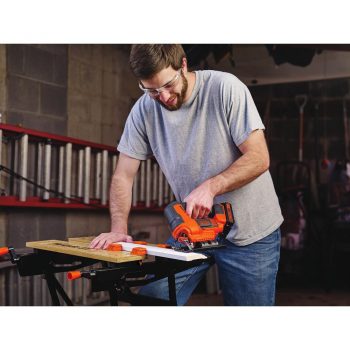 The most advantageous part of a cordless jigsaw is its portability. Since these are battery operated machines, one is not bound to stay near an electrical outlet. Not having a trailing power cord can be easier to work with in certain situations. Cordless jigsaws can be used to work outside the sites, so tradesmen prefer them more over the corded ones.

These cordless power tools also come in handy when doing DIYs that need to be done outside. For example, making a garden decking will require one to use the jigsaw outside.

These are the advantages, but there are a couple of disadvantages to this as well. Cordless jigsaws are driven with a battery so they have a limited time for power supply. And the battery can drain out pretty quickly, especially when cutting through thicker materials. If you’re someone who has to do a lot of heavy duty cutting on a regular basis, it is better that you opt for 18V, 24V or 36V battery pack. It’s more cost efficient that way.

Another disadvantage is the price of the cordless jigsaws, which is generally higher than a corded one. This happens because most models of cordless jigsaws are sold together with batteries and a charger, and this adds up on the grand total.

Here’s a pro tip: If you already own a power tool and the new one is from the same manufacturer, buying a bare unit and using the battery and charger from the other tool can save you quite a bit of money.

On the other hand, cordless jigsaws require regular charging, so working on a project for a long period at once is not possible, which is another drawback. But some jigsaws come with a spare battery so that can be an alternative.

The added battery adds an extra weight to the cordless jigsaws, making them comparatively heavier to the corded ones. This can lead to fatigue for projects that require a long time.

For projects that need portable tools, it is recommended to get a cordless jigsaw.

Here’s an article explaining the differences, pros and cons.

Corded and cordless jigsaws each have their own motor speeds, completely different from one another. Corded models have the range of approximately 4-7 Amp while cordless ones have the range of 18-20V. The more powerful the motor, the easier it is to cut through tougher materials.

On average, a motor power of around 5 Amps (For corded) or 18V (For cordless) is enough for most users. Even though power is an important factor, other features such as speed, bevel, and orbital settings are useful things to note.

Jigsaw’s speeds are measured in SPM (Strokes per Minute). The maximum speed of most models in the market is limited to 3,000 SPM. This speed is more than enough for most projects.

What’s more important than the speed is the variable speed settings. Most models have a range of 4-7 speed settings, which is great for flexibility and precision. Deep cuts in tough hardwoods need high speed, while low speed is needed for hard steels.

Before making a purchase, take some time to figure out your needs. For straightforward and regular DIY projects, you don’t need a fancy, high-tech power tool.

A jigsaw with only a few speed settings should be enough for you. That way, you don’t need to spend money on more variable speed settings which you won’t even use.

Regular jigsaws move in a vertical motion, but with the introduction of orbital settings, using a circular motion you can also manage the jigsaw’s backward, forward and sideways movements.

It is possible to work with more precision and speed if the jigsaw has orbital settings. Not just that, it is also helpful in removing the chips efficiently. If you need to cut through many different types of materials, go for a jigsaw with more orbital settings.

For more detailed info on orbital settings, check out this great article!

Most jigsaws can be tilted to make bevel cuts. Generally one needs to loosen a screw to tilt the base up to 45 degrees in either direction. Most saws offer an onboard Allen wrench for adjusting the base, while some have a built-in lever to loosen and tighten the base.

Sliding the bases is useful when you need to work on vertical surfaces, such as working inside a closet or against a wall. The more bevel settings there are, the more flexible is the jigsaw.

I found this detailed guide that explains how to cut a beveled curve with a jigsaw.

Most jigsaws can do straight cuts without any issues, but sometimes they have problems with curved cuts. Curved cuts option depends mostly on the orbital settings.

Changing or removing the blades needs to be fast and easy. The easiest way to do this is with the ones which have the quick-release-blade-changing-device feature, as you don’t need any other additional tools. Advanced models only require a press or pull of a lever to do so. Some jigsaws even have blade carriers that sport a flange at the ends.

Here’s a video showing how to replace a jigsaw blade:

Getting the chips and dust out of the way is a neat process to see the line you are cutting. Some models have a dust blower or dust collector feature for this issue.

The dust blower supplies an air stream to remove the dust away from the work area, while the dust collector sucks it in. Between dust blower and collectors, collectors are better options. In case of dust blowers, there is still a risk of getting a flying chip in the eye.

But unfortunately, dust collectors are sold separately, making them a pricey purchase for the jigsaw.

Too much vibration will hamper the precision and accuracy of the jigsaw. Updated versions now also have a special vibration reduction feature.

Before making a purchase, try to read through previous users’ reviews to find out if the vibration is too much.

Based on the type of project at hand, you can choose the one that best suits you.

I compiled a list of best Jigsaws for 2018 both corded and cordless, check it out here.

Hey! My name is Michel and I’m a home improvement expert. The reason I created this site is to help you choose the best products for your home from gadgets and appliances to decor and interior design. If you have anything interesting that you want to share then please don’t hesitate to post a comment. 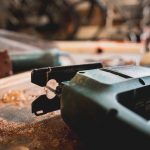 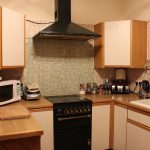 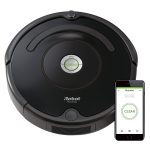 How to Choose A Robot Vacuum/Mop3 Total Shares 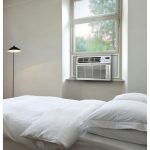 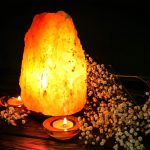 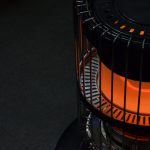 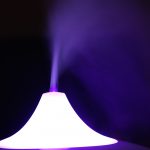 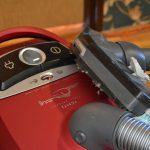 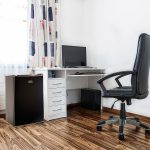 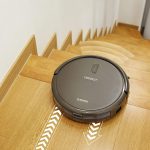 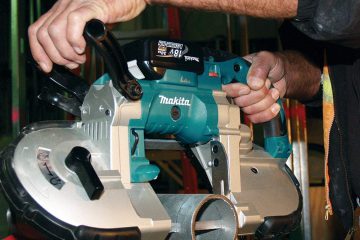 How to Choose a Band Saw

Knowing how to choose a band saw is essential, whether you are a professional woodworker or just a novice DIY type of guy, it can be tricky finding the best one suitable for your needs Read more… 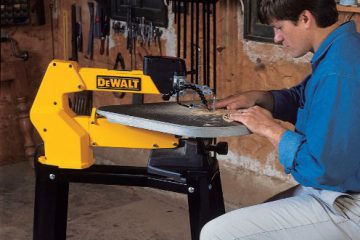 If you’re looking to make extremely precise cuts, you will need to look for the best scroll saw. It is very easy to work with and ideal for creating small decorations within wooden pieces. Scrolls Read more…

How to Choose a Miter Saw

If you are a woodworker, or you just like to use electric saws for your small projects, then it would be important to know how to choose a miter saw. Miter saws are compulsory to Read more…